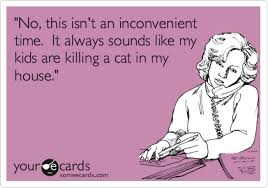 This morning we got up late.  I slept badly due to an overactive imagination and an insomniac three-year old who eventually ended up in bed with us.  As a result I felt like a horse startled out of the stalls when the pistol fires (my husband insistently poking me awake.  One of these days I WILL break his fingers).  It went a bit like this:

And they’re off! Distressed Housewife got off to a slow start but she’s gaining much-needed momentum now that she’s had her morning coffee.  If she’s going to make good time though, she’ll have to imbibe it whilst wrestling a reluctant M into his uniform.  Oh no!  The jumper drowns him!  She’s only gone and washed all three of her eight year old’s school jumpers and none of her (almost) five-year old’s.

She would ponder whether if, on some subliminal level, she’s done it as revenge for his being a little shit all weekend but she’s falling behind; she’ll never make it if she tries to feel guilty in addition to getting everyone out of the door by twenty to nine.

She’s already accepted she’s missed the window of opportunity to poo in peace so she barely raises an objection when her three-year old announces, ‘I watching, Mummy.’  She can only hope that this morning she won’t have to wait with her knickers round her knees whilst all three of her children decide they need to use the loo and then proceed to urinate on the seat.

Uh-oh, there’s an unexpected hurdle: J’s rugby stuff is still festering in the bath from yesterday. So caked was it in mud that Distressed Housewife feared it would block the washing machine if it wasn’t rinsed first…and then promptly forgot about it.  Epic fail!  She has no choice but to leave it there until later and straddle it most unattractively whilst showering.

She experiences a moment of elation though when she realises she’s got the last clean, dry towel from the cupboard (and, for once, it’s actually bigger than a facecloth!).  She forgot to wash some yesterday but that’s not going to phase her, ladies and gentleman.  Why?  Because at this point in the race it’s every man for himself (and it will be her husband using the wet ones that he’s left on the floor at his side of the bed…AGAIN).

She spends the next five minutes shoehorning her arse into newly washed jeans that are as unyielding as her children whilst her eight-year-old watches, slowly chewing his toast.  He has no reason to be in her bedroom but has that ever stopped him before?  She’s certainly not about to draw ahead with him under her feet (and with his own feet still bare because he won’t get his f***ing shoes on).

She manages to persuade him downstairs to be replaced by M who wants to practise his tricky words. And whilst she makes encouraging noises, really she’s got no clue what he’s saying as she’s focused on trying not to poke out her eye with the mascara wand or burn her forehead with the straighteners.

At that moment, Distressed Housewife’s husband announces he’s leaving for work and calls upstairs that he’s ‘done everything’.  She knows she’ll soon uncover his blatant lie but she still needs to put toothpaste on brushes and sign J’s reading diary so she dutifully (and suspiciously) kisses him and bids him goodbye.

Her youngest suddenly appears incongruously dressed as Buzz Lightyear, courtesy of her eight year old.  And even though it’s on backwards and J still hasn’t put on his f***ing shoes, she’s grateful that he’s saved her a job.

She gets downstairs with the realisation that she’ll have to forfeit breakfast until after the school run (even though she could really do with the energy) and optimistically pops a cod liver oil tablet and multi-vitamin instead as she surveys her surroundings.

She idly ponders what parallel universe her husband was inhabiting when he said he’d ‘done everything’ as the kitchen’s a bombsite, the bin is full to bursting and he hasn’t put out the shitting recycling again! (it’s a regular bone of contention).

She’d love to have time to send him a suitably scathing and sarcastic text but there are lunches to put in bags, books to put in folders and small people to put in coats/a Buzz Lightyear mask and wings.

She bundles them out of the door, ignoring the dog’s puppy dog eyes that plead to go with them as there’ll be no time for poop-scooping as they power walk to school.

And against all the odds stacked against them, they make it finish line with a very respectable three minutes to spare and amazingly, all bets are off 😉

all bets are off, children, horses, humour, school run, stalls