So, I may have mentioned in passing…you know, just once or twice…that I’m going ‘Sober for October’.  I’m officially nine days in but I had an extra weekend due to the kidney infection so I’ve been tee-total for a total of…wait for it…TWELVE DAYS.  I know.  Pretty good for a self-confessed wino if I do say so myself.

What’s more, the thought of not touching a drop of alcohol for another three and a bit weeks does not fill me with dread as I thought it would, which I’m putting down to ‘the psychology of wine’.  (That’s an unofficial term conjured up by my extra brain cells not killed off by the vino).

Ordinarily I have to admit I’m not an especially ‘glass half-full’ kind of person (and if it was wine I’d be outraged that it was only half-full and demand a top up).  It’s not that I’m negative as such, just a bit cynical in a, ‘the glass seems half full but don’t be fooled, it may have been spiked or spat in’ kind ofÂ way.  Therefore all this ‘positive mental attitude’ has come as a bit of a shock (or maybe I’m just in withdrawal and that’s one of the side effects).

Instead of thinking how long I’ve got to go, I’m congratulating myself on how long I’ve done already without feeling the need to open a bottle of wine just to sniff it.  I haven’t (yet) burst into tears on Aisle 24 (aka The Wine Aisle) at Tesco.  I’ve not succumbed to licking the condensation from the bottles in the fridge at the local off-licence and I’ve resisted stabbing my husband in the leg with the corkscrew when he indulges on a weekend.  That, my friends, is what you call a success.

Not only that, we went round to our friends’ house for the evening last Saturday, I drank sparkling mineral water all evening and drove home…and still had a really good night.  I’d heard about such things of course, you know, great evenings out that don’t involve alcohol but like leprechauns, I wasn’t entirely sure of their existence…until now.  (Enjoyable alcohol free evenings, I mean, I’m still not convinced about leprechauns). 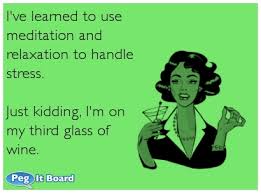 I’m sleeping better (I’ve SO just tempted fate by saying that), my skin looks healthier because I’m drinking loads of water and I went for a run on Monday for the first time in ages and found I could still speak and stand up at the end of it.  Bonus.

Instead of bemoaning evenings without booze, I’ve arranged something enjoyable to do each weekend that doesn’t revolve around alcohol and so, for the first time since we had children, my husband and I are going to the cinema together on Friday.  (We briefly contemplated snogging in the back row but have scrapped the idea; him because he said he won’t be able to see that far without his glasses and me because I’m more interested in eating my body weight in chocolate and popcorn.)

Don’t get me wrong, I’m not planning on doing this sobriety thing long-term and I don’t for one minute think I won’t revert to being a lush.  Indeed, next week or the week after, my ‘Sober for October’ update post may well just consist of the single sentence, ‘I don’t care about raising money, just pass me the f***ing wine!!!’…but at the moment, it’s better than I thought it was going to be.

You know what would make it even better?  If you could find it in your hearts (or your purses) to sponsor me a couple of quid at https://www.gosober.org.uk/profile/charlotteabrown.  Because on a serious note, my lovely, brave, positive friend had a mastectomy and reconstructive surgery yesterday and over everything, it’s her and all the other people affected by cancer and who are being supported by Macmillan that are spurring me on.

(N.B.  If you don’t sponsor me, next time you wake up with a hangover I’ll be the smug bastard who’s fresh as a daisy at 7am, calling through your bathroom door that I’ll cook you a fry up whilst you’re puking in the toilet.  YOU HAVE BEEN WARNED.) 😉