Yes, that’s right, I’m blogging about socks.  Why?  Because writing my blog is cathartic, it’s where I air my grievances.  And I have a major grievance against socks.  Bastards.

J and M have to wear grey socks for school.  We were told explicitly at M’s ‘welcome’ meeting (in inverted commas because we weren’t made to feel very welcome) that boys’ socks have to be grey.  And I quote, ‘Not black, not coloured, not grey with stripes, just plain grey.’  So there, that told us.  And being the good, obedient (terrified) parent that I am (seriously, the Head is well scary), I went and bought a pack of seven pairs of plain grey socks for each of them. 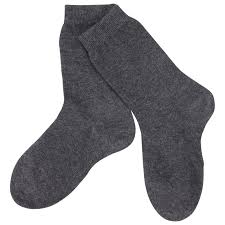 I figured that would be a pair for each day of the week and two spare.  That sounds reasonable, doesn’t it?  Well it hasn’t worked out that way because, as I mentioned earlier, socks are bastards.  And my washing machine is working in cahoots with them.  I know this because I definitely bought fourteen pairs of socks and now we’re down to about eight.  The others have disappeared which means they’ve either done a runner…or the washing machine has eaten them.

I’m not exaggerating when I say socks cause me unbelievable stress every single week.  Every shitting week I get to the point where I can only find one lone grey sock.  I search high and low for its partner but it’s nowhere to be found.  Maybe they had a falling out, maybe the other grey socks fancied a bit of excitement and had an affair with an altogether edgier striped sock.  The ones prohibited by school. Maybe that’s why the striped sock is more exciting; forbidden fruit and all that.

Anyway, for whatever reason I can’t find the other one so I end up surreptitiously rooting a dirty one out of the washing basket and then quickly pairing them up and presenting them to one of the kids with a flourish before they notice that one of them is more wrinkled and crusty than the other.

Then, on Thursday, walking home from school, J was running and I caught a flash of his socks.  Hold on whilst I breathe into a paper bag because I’m hyperventilating.  He was wearing red socks.  Red.  Socks.  Not a trace of grey in sight.  Not even just red and grey stripes.  Fully red.  All over.

There’s only one answer to why he did this.  Clearly, he hates me.  Why else would he flout the rules so blatantly with complete disregard for my safety?  I really do believe the Head would have me hunted down and tortured for such disobedience.  Maybe J knows that and it will be his revenge for the time I made him eat Corned Beef Hash.  Who knows.  There have been so many misdemeanours on my part as his mother he could be holding a serious grudge for any of them.  I once bought him Mini Cheddars from the petrol station even though he says he’s told me loads of times that he doesn’t like them.  Could easily be that.

Then, in addition to my ongoing grey school sock trauma, I also have to contend with Z’s sock ‘situation’.  His feet keep growing.  I tumble dry his socks so they keep shrinking.  However hard I try, I can’t ever seem to match the ratio of growth versus shrinkage.  One week he has socks that fit him, the next week he doesn’t.  So I put M’s (non-grey) socks on him.  And then they’re too big and the heel bit sits on his ankle which everyone knows is extremely uncomfortable when you add shoes to the equation.  Or I force his feet into ones where the heel bit sits correctly…but he can’t straighten out his toes.

If that wasn’t enough, he’s also inherited the day of the week socks from M.  They’ve hardly been worn because I can only ever find Wednesday socks on a Monday or Sunday socks on Thursday and obviously it would be absurd to wear day of the week socks on the wrong day. (Are you listening to me, hubby?  Absurd.  So don’t do it.  Hopefully you learnt your lesson that one time when you thought it would be acceptable.  It’s not.  Ever.)

Socks: they go missing.  They stretch. They shrink.  They get holes in them.  They turn up on the wrong day.  They make you get into trouble with scary head teachers.

Socks: apart from the warm feet thing, there’s really nothing to like about them, is there?