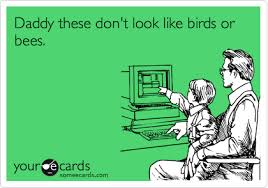 Josh and I had ‘The Birds and the Bees’ talk last night.

We were all watching The Simpsons (hubby and I are never entirely sure of its appropriateness as a children’s programme but it makes the kids howl so we tend to let it slide).  Marge had made a deal with the Devil who had come to ‘cash in’ by claiming their ‘favourite child’ (which turned out to be Maggie, much to Lisa’s chagrin) The only alternative the Devil would accept was a ‘three-way’ with Homer and another demon (as I said, we don’t always find the subject matter entirely child friendly).

‘Are they going to have sex?’ enquired Josh, matter-of-factly.  Hubby and I spluttered; our knee-jerk reaction was to mumble something along the lines of, ‘No, of course not!’  and a rather hysterical, ‘Josh!’  (Very mature, I know, but in our defence we were put on the spot).

Episode over, hubby took the boys upstairs to bed whilst I sat and thought about what Josh had asked.  I came to the conclusion that it was probably better to tackle the subject when he broached it than to wait until some contrived moment of our choosing.  So as they cleaned their teeth and squabbled upstairs, I did a quick internet search for advice on how to best explain the subject to an almost nine-year old.

I quietly told hubby what I was about to do and called Josh downstairs for ‘a chat’.

‘You know how you just mentioned sex when we were watching The Simpsons?’ I started.  ‘Er, yeah…’ replied Josh, starting to blush and squirm.  ‘What do you already know about it?’ I asked.  ‘I can’t tell YOU!’ he exclaimed, horrified.  ‘You’ll think it’s rude!’  (Bless him.)

After a bit of prompting and reassurance that I wouldn’t be shocked (good Catholic girl that I am) he conceded that, ‘It’s when people kiss and stuff and climb all over each other.’  He also knew that people have to ‘strip off’ to have sex but the details became a bit blurry after that.

I asked him if he knew that babies were made by two people having sex and watched his innocence dissolve and be replaced by images for which he will no doubt need counselling when he’s older as the implication hit him of where he and his brothers came from.  To his credit, he managed not to shudder or say, ‘Ewww!’ as he looked from me to hubby and I confirmed that yes, we have had sex and he could therefore speak openly to us about it.

Most embarrassing bit over, I then went on to explain, in factual terms (as recommended by my ‘research’), how the penis enters the vagina (‘Oh, you mean a lady’s daisy?’ Josh wanted to know.  I’m more worried about where he’s got that term from because I, for one, have never used it) and produces sperm that look like little tadpoles.

Josh was fascinated, especially when I drew a picture in the air of fallopian tubes leading down to a uterus and the sperm meeting the egg to burrow its way inside.  We talked about the miracle of cells forming to create a person with all his or her individual components and I described the egg nestling in the side of the uterus to grow into a baby.

I could see enlightenment as he started to understand why women’s stomachs swell during pregnancy and we discussed why periods stop at this time too.  On this occasion we were a little more technical than referring to the baby’s head as ‘a plug, to stop the blood from falling out.’

I told him how people have sex for pleasure, not just to make babies and therefore use condoms when they don’t want to get pregnant; he tried his very best not to look disgusted as I assured him that although it sounds gross now, he’ll understand when he’s older.

I was so very proud of him when he asked questions about the two men on Modern Family who have a baby.  I asked him if he knew the term for two men or two women that are in a relationship and we went on to discuss being gay and how even though two people of the same sex can be in love and be intimate, they can’t make a baby and would therefore have to adopt.  (I’m saving IVF, frozen eggs and sperm and surrogates for another day.)

Josh thought of very sensible and legitimate reasons why people may put a child up for adoption; we talked about how sometimes even a man and a woman can’t get pregnant and therefore may choose to give a loving home to another child.  I interjected just how lucky me and his Dad are to have had not just one but three children and how people who adopt love the child just as much as if they had given birth to him or her, giving the example of my single friend who has just adopted a little girl.

We then came to a natural interlude and I felt that my part was over; I told Josh to think about everything we had talked about and if he had any questions to just ask…then I handed him over to hubby to tell him about ‘morning glory’, the importance of cleaning behind a foreskin and, when Josh asked, circumcision.  I thought it was only fair 😉

I was so, so proud of my boy.  He was mature and thoughtful.  He asked sensible questions.  He asserted that sex is for two people who love each other and should be done behind closed doors.  He accepted the idea of homosexuality without judgement and decided that sex wasn’t something he was going to discuss with all his friends but he was glad he knew the facts.

My little boy is growing up…but growing up into an open-minded, sensitive, mature young man.  I feel honoured to have shared this potentially toe-curling but nonetheless milestone moment with him…which is just as well, because once he finds out I’ve shared our little discussion on here he’ll probably never confide in me again 😉